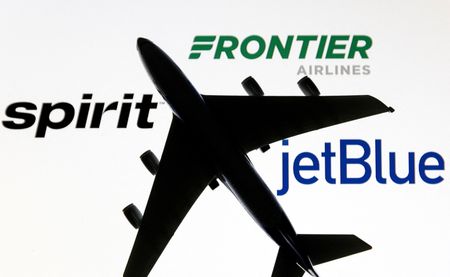 (Reuters) – Spirit Airlines Inc on Tuesday again cited antitrust concerns to reject JetBlue Airways Corp’s sweetened offer and asked its shareholders to vote for a merger with Frontier Group Holdings Inc at a meeting on Thursday.

In the latest offer, JetBlue included a ticking fee of 10 cents per Spirit share, raising the deal value to $34.15 per share, representing a 51% premium to Spirit’s Monday closing price.

It also raised the breakup fee by $50 million to $400 million if the deal fails to get regulatory approval in an attempt to persuade Spirit to reject Frontier’s bid.

Spirit, however, has been skeptical of the deal clearing the antitrust hurdle due to JetBlue’s alliance with American Airlines Group Inc in the Northeast, which has been sued https://www.reuters.com/world/us/us-says-antitrust-suit-challenging-air-alliance-should-advance-2021-12-14 by the Justice Department.

“The latest offer from JetBlue does nothing to address our Board’s serious concerns that a combination with them would not receive regulatory approval,” Spirit Chief Executive Ted Christie said.

JetBlue did not respond to a request for comment. The New York-based carrier had offered to make some divestitures to seal a deal with Spirit, but excluded the ‘Northeast Alliance’ from those pledges.

Both JetBlue and Bill Franke-backed Frontier are locked in an intense bidding war for Spirit as they seek to create the fifth-largest airline that can take on the legacy players in the United States.

Frontier’s latest cash-and-stock offer was valued at $22.03 per share as of Monday’s closing price, well below JetBlue’s bid.

After Frontier raised the cash component of the offer last week, influential proxy advisory firm Institutional Shareholder Services has backed a deal with the airline.

JetBlue, however, has found support from one Spirit shareholder, TIG Advisors LLC. The asset manager, which owns about 2% stake, said it would vote against Spirit’s merger with Frontier as the JetBlue offer was better.

Shares of Spirit Airlines were up 1.6% and Frontier 3%, while JetBlue shares were up about 1% amid a broader surge in travel stocks.

(Reporting by Abhijith Ganapavaram in Bengaluru; Editing by Arun Koyyur)