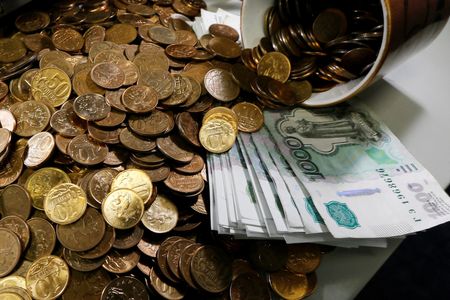 MOSCOW (Reuters) – The rouble rallied past 52 against the dollar to a more than a seven-year high on Tuesday as capital controls and month-end taxes offset the negative impact of Western statements that Russia has defaulted on its international bonds.

The rouble became the world’s best-performing currency http://fingfx.thomsonreuters.com/gfx/rngs/GLOBAL-CURRENCIES-PERFORMANCE/0100301V041/index.html this year, boosted by emergency measures that authorities have taken to shield Russia’s financial system from western sanctions after Moscow sent tens of thousands of troops into Ukraine.

The rouble is much stronger now than it was before Russia started what it calls a “special military operation” in Ukraine on Feb. 24. Back then the rouble traded near 80 against the dollar and 90 against the euro as it was in free-float mode, hammered by fears of sanctions and had no support from capital controls.

Now demand for foreign currency in Russia remains below supply volumes from export-focused companies that need to convert their dollar and euro revenue to pay month-end taxes.

With restrictions on forex withdrawal from banks’ accounts for individuals, capital restrictions have helped the rouble shrug off Western statements that Russia has defaulted on its international bonds for the first time in more than a century.

But Kremlin, which has money to make payments from oil and gas revenue, has rejected the claims and accused the West of driving it into an artificial default.

The declared default will have no substantial impact on Russian securities as Eurobonds have long priced in the default, while the external debt market is shut for Russia in any case, said Alexander Afonin, head of debt research at Sinara investment bank.

The rouble’s upside could be limited given growing concerns about the impact of the strong rouble on Russia’s revenues from selling commodities abroad for foreign currency.

Market players “see the current levels as attractive for purchasing hard currency, especially in light of the recent comments from Russian officials indicating that the rouble has become too strong,” Sberbank CIB said in a note.

(Reporting by Reuters; editing by Barbara Lewis and Shinjini Ganguli)