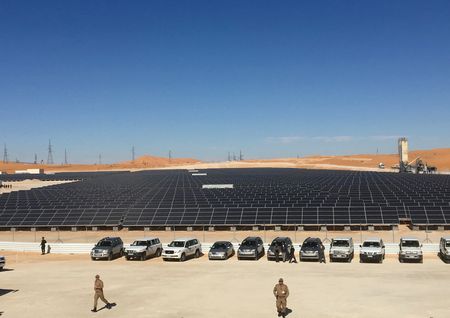 CAIRO (Reuters) – Arab states could come close to achieving renewable energy targets for 2030 if they complete planned utility-scale solar and wind projects according to projected timelines, a report published on Tuesday said.

The planned projects would raise solar and wind capacity in Middle Eastern and North African Arab states to about 73GW from 12.1GW over the next eight years, according to the Global Energy Monitor, a US-based, non-profit research group.

Projects already under construction would add 7.6GW, while projects that are either in development or have been announced would contribute a further 65.5GW, according to the group.

In 2013, the Arab League committed to increasing the region’s installed renewable power generation capacity to 80GW by 2030.

Currently, Egypt is the country in the region that has the highest renewables capacity with 3.5GW, followed by the United Arab Emirates with 2.6GW and Morocco with 1.9GW, Gobal Energy Monitor said.

Oman, Morocco, Algeria and Kuwait are among the states with the most ambitious plans for expanding solar and wind capacity, it added.